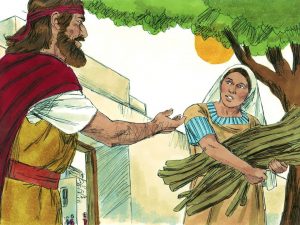 This is the Bible lesson about Elijah and the widow of Zarephath.

This is a story from 1 Kings 17:17-24. In the story the prophet Elijah met a widow who had one son. They were very poor and were starving due to a very severe famine. Elijah asked the woman for water and for some bread. The woman replied that she had no bread but only had enough for a final meal for herself and her son.

Elijah told her not to worry but to do as he asked. Then she would find that she had enough to eat. She did as Elijah asked.

Sure enough Eliljah’s word was true. Elijah stayed with the woman for many days until God called him for another task. The video below tells this part of the story only. There is more to the story since the woman’s boy died some time after Elijah had arrived at her house. In the video, I ask those who are watching to go read the Bible to find out what happened.

Visual aids may be found at FreeBibleImages.org

This video may be shown to children in a class setting or used for a teacher who wants to discover new teaching ideas. Click on the video below to watch. It may also be found in YouTube here: https://www.youtube.com/watch?v=5cyTNC7DNGs&list=PLkJ7psdIV2kyqnF0-1M3rlg_Zu4JdkaFU&index=2