This is the true story of the tower of Babel from Genesis 11:1-9. The kids love this lesson as it is presented here. Do not feel you must do EVERY activity with this lesson. There is more than you will need for one class period.

This lesson is designed for grades 4-6 but may be adjusted for younger children. 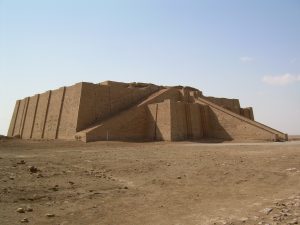 REVIEW – I teach the Old Testament chronologically. This lesson is a continuation of our study so far from Creation through Noah. Review the following with the children:

LESSON READINESS – Pick one activity below as a way to introduce the Bible lesson.

Activity #1 – Begin speaking in Spanish or another language you may know. You might also use Google translate. Have someone else speak back in another language. My daughter “speaks” back to me using American Sign Language. We cannot “understand” each other and “get frustrated” after a minute or two of trying to communicate.  Samples of what to say in Spanish might be the following:

Stop and ask children (in English) what just happened. Ask children if I sound like I am “babbling”?  Discuss how hard it is to understand another person who speaks a different language than you do.

Why did we just do that activity? Let’s get into our Bible lesson today, and we will find out why.

Activity #2 – This activity will leave a strong imprint of the concept of needing to communicate when you are working together. Do NOT discuss that concept during this activity. Let them simply experience the frustration of not being able to communicate and the difficulty it causes. The concept will be fully revealed and discussed later in the Bible lesson. 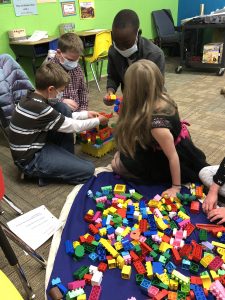 Bring the children back together and use the attached PowerPoint presentation to teach Genesis 11:1-9.

If you did not do the previous activity, simply begin the Bible story here..

Slide #2 – Genesis 11:2, “It came about as they journeyed east, that they found a plain in the land of Shinar and settled there.”

Slide #5 – Genesis 11:3, “And they used brick for stone, and they used tar for mortar.” We will talk about the tar used as a mortar in a minute. This is a picture of someone making bricks as they did long ago. They still make bricks this way in some parts of our world.

Slide 8 – And so the people worked together to make the great city and high tower.

Slide #10 – This is a very old picture of a Ziggurat in ancient Ur. It was made of mud bricks with tar as mortar.

Slide #11 – This is the same building after it was restored.

Slide #12 – This is a picture from high above the structure. You can see that another layer was built on top of the first layer. It is possible there were more layers on top, but they are gone now.

Slide #13 – It is possible that the biblical Tower of Babel is the ziggurat found at the site of ancient Ur. There is a large ruin of an ancient city and large building made of mud bricks that were fired in a kiln. The structure also uses tar for mortar. It may not be the actual Tower of Babel, but it is built with similar ancient technology. For more information, see the bottom of this article.

Slide #14 – God saw how they were working together to make such proud plans and decided to put a stop to their building by confusing their language, so they could not understand each other or work together.

Slide #15 – Is it confusing to work together when you cannot talk to each other? Do you remember how hard it was to build something a few minutes ago? It would have been much easier to build it if you could talk to each other. Right?​

Slide #16 – Genesis 1:5-7, “The LORD came down to see the city and the tower which the sons of men had built.  The LORD said, ‘Behold, they are one people, and they all have the same language. And this is what they began to do, and now nothing which they purpose to do will be impossible for them. Come, let Us go down and there confuse their language, so that they will not understand one another’s speech.'”  So, the workers started babbling in different languages. They could not understand each other.

Slide #17 – So, the Lord scattered them over all the earth, and they stopped building the city.​

These people decided they wanted to live only in one area and become a great and very famous people. They did not ask God to guide them in building the great city and tower up to heaven. God wanted them to scatter and fill the earth. The people did not have enough faith in God to obey His commands.  They only thought of themselves and what they wanted to do. So, God had to act. He chose to change their languages. This forced them to scatter to other places.

An excellent song to sing with this lesson is Trust and Obey.

You may also sing or recite in rhythm this Tower of Babel song. It is found in Sing a Story by Jewel Kendrick, 1975.

(Sing to the tune of Twinkle, Twinkle Little Star)

They only moved to the Plain Shinar.

Built a tower, there they stayed.

God was not pleased with their plan.

He changed their language, every man.

Assign a new memory verse – Hebrews 11:6 NASB 1995. “Without faith it is impossible to please Him, for he who comes to God must believe that He is and that He is a rewarder of those who seek Him.” This verse may be shortened to only the first half. It is your choice based on the kids you have in your class.

Without faith it’s impossible to

Anyone who comes to Him

Must believe that He exists and

If you want, you may introduce a learning center for the children to work on in the future.  Children work on learning centers as they enter my class before we actually begin. It is a simple match game and may be downloaded here: Tower of Babel Match Game – Kids Bible Class Ideas. This may also be used as a small group game before class begins.

Here is another learning center for the Tower of Babel that can also be used by the children in future classes: Tower of Babel – Kids Bible Class Ideas

For additional teacher study on the ruins of ancient Ur which may or may not be the biblical Babel, read this information:

“The Ziggurat at Ur and the temple on its top were built around 2100 B.C.E. by the king Ur-Nammu of the Third Dynasty of Ur for the moon goddess Nanna, the divine patron of the city state. The structure would have been the highest point in the city by far and, like the spire of a medieval cathedral, would have been visible for miles around, a focal point for travelers and the pious alike. As the Ziggurat supported the temple of the patron god of the city of Ur, it is likely that it was the place where the citizens of Ur would bring agricultural surplus and where they would go to receive their regular food allotments. In antiquity, to visit the ziggurat at Ur was to seek both spiritual and physical nourishment.” Ziggurat of Ur – Smarthistory